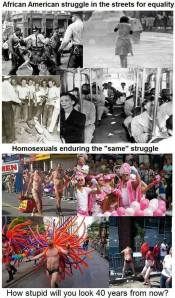 No, I am not questioning the title of this powerful presentation.

There is a presentation at the end of this blog that is entitled “From Selma To Stonewall.”

They constantly used “From Selma To Stonewall” to equate the struggle of the Civil Rights Movement to the Stonewall Inn Riots. What is also remarkable is that those that walked the streets for Civil Rights never corrected the president and the first lady. The people that were there should have cried out that the struggle for homosexual freedom cannot be compared to the struggle for racial equality.

There is a reason.

When you are not a born again believer that believes the Bible is the Word of God, and that the Lord condemned the sin of homosexuality, it is very easy to concoct a bald face lie.

This peaceful demonstration took place to gain voting rights and the local and state authorities of Alabama attacked the peaceful protesters.

Stonewall is not a local town.

Stonewall Inn was a bar in Greenwich Village located on the lower west side of Manhattan frequented by homosexuals and other individuals of the sex scene of the 60’s.

The Stonewall Inn was owned by the Mafia. The police would raid these places to attack organized crime.

Not deal with the homosexuals.

So Stonewall had nothing to do with Civil Rights.

Yet, we hear the president and first lady utter these words constantly.

“From Selma to Stonewall.”

Now mind you, the president and first lady are about my age. We were too young to know what took place in Selma, but perhaps old enough to do what we call in elementary school “Current Events.”

We would paste news events in our composition book (I know…..silly), and then write a brief summary of the event.

I do not remember doing a current event on Stonewall.

I do not remember my Language Arts or English teacher in elementary school telling us about the Stonewall riots. We didn’t know that a riot took place on the lower west side of Manhattan because NYC was a lascivious town in riot mode day and night.

The phrase, “The City Never Sleeps” is for real.

And I lived as an 8 year old in Brooklyn at the time.

Thank God that history was recorded and properly documented. Otherwise, we would be able to make even the past anything we want it to be.

So what makes us think that the president and the first lady knew anything about Selma and Stonewall to be able to invoke its memory, and make a contemptible connection of a sacred Civil Rights Struggle to the sin of homosexuality?

As you will see in the documentary, the contrast is clear.

Listen to the last line in the documentary very closely.

“Stonewall wasn’t any Selma and gay is not the new black.”

A link of this documentary is provided.

“Our responsibility is never to oppose the truth, but to stand for the truth at all times.” 2 Corinthians 13:8 (NLT)