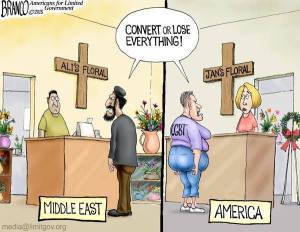 Thanks to Dr. Michael Brown that posted this picture, it is a clear depiction of the climate in the United States.

Of course the elite of LGBT would turn the tables and put preachers standing at the counter but never have we come with a lawsuit to impose Christianity on any homosexual. Then again, with what is out there, they may have been an attempt that I haven’t heard of yet. And even if it were the case, true believers would condemn it in a heartbeat.

True believers always leave it to the choice of people to accept or reject the gospel.

We would never force or impose by lawsuit our beliefs on people.

In fact, it would not see the light of day in the courtroom. It would be tossed out as a meritless case.

While this is not meant to be amusing, it is what it is. With going after businesses that hold to traditional marriage between one male and one female, the elite is looking to press the issue.

And this picture clearly underscores the siege that true believers are under.

Of course, they may issue a lawsuit about this cartoon, but this is free speech. Homosexuals will be enraged, but truth is truth.

And of course, the muslim community would also be enraged because they believe that islam is peaceful. Knowing the history about how islam started around 598 BC, there is no question of the bloodshed. Be not deceived. Fast forward it to today with ISIS or ISIL, or IS, we see that nothing much has changed. Even with protestant churches that claim to know Jesus like Westboro Baptist Church, their radical form of……..whatever you want to call it, is equally extreme, vicious, senseless, pathetic, and downright wrong.

Yes, in every corner where people practice whatever it is they practice, there will always be extremism rearing it’s ugly head.

But just because there is extremism in Christianity, it doesn’t make the most powerful gospel extreme and wrong.

Name one religion that sent a Son to die for the sins of the whole world other than Jesus.

I defy you to find one that is better than the Lord Jesus Christ.

Within the norms of Christianity, repentance of sin, obedience to the gospel, and being born again, free of charge because Jesus paid the price for sin to release us from bondage, it the best in the world. You will not get a better deal than to be released form sin, even though you are guilty, caught dead in trespasses and sins.

“For by grace are you saved through faith, and that not of yourselves. IT IS THE GIFT OF GOD, not of works lest any man should boast.” Ephesians 2:8-9

Salvation is a gift so you don’t have to work for salvation. According to the gospel of Jesus Christ, salvation is unearned favor.

No better way of escaping judgment exists other than in Jesus Christ.

Draw a picture of Muhammad, and you are marked as blasphemous, marked for death.

Draw a picture of Jesus, make movies (Jesus Christ Superstar, etc.) and yes, it is blasphemous, yes, we would be outraged, but you will not see us demanding someone’s head.