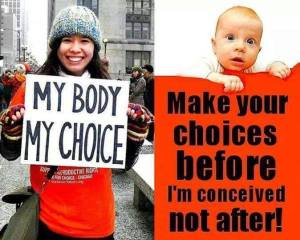 Psalm 24:1 says, “The earth is the Lord’s, and all its fullness, the world and those who dwell therein.”

This verse ties in with Genesis 1:26-28. “Then God said, “Let Us make man in Our image, according to Our likeness; let them have dominion over the fish of the sea, over the birds of the air, and over the cattle, over all the earth and over every creeping thing that creeps on the earth.” So God created man in His own image; in the image of God He created him; male and female He created them. Then God blessed them, and God said to them, “Be fruitful and multiply…”

These verses solves the ownership issue. That is, if you accept the Bible as final authority.

Because man refuses to accept the Bible as final authority, it is very easy for man to errantly assume that he is not under God’s authority.

But man is not without answering to any authority.

The laws that we live by came from God.

If you were to murder someone, you would be charged with a crime of homicide.

So what man has done is to make a law to circumvent the law of murder. Hence, Roe vs. Wade.

And Genesis 9:6 says, “Whoever sheds man’s blood, by man his blood shall be shed; for in the image of God He made man.”

This is absolute. So being that the law to not murder is suppressed, man is quick to sacrifice a child to cover their sin of adultery and or fornication.

That’s because they errantly assume that they are free from obeying the law to not murder anyone.

So the other lie to suppress the truth is that women believe that their body is their body.

If we made ourselves, then we could declare absolute ownership.

Just like if we were to make a product, we would secure copyrights and if necessary, trademarks because if its originality, to protect your product from those seeking to infringe on your product.

God has exclusive rights to your body whether you agree with Him or not.

If you ever ask yourself the question as to why man must die, we must go to the Manufacturer to find out why.

Life comes from God and disobedience to God brought about death (see Romans 5:12).

When it comes to creation of the human body, we don’t have a clue about creating ourselves. After the initial making of humans (Adam and Eve), we can only copulate to procreate within the confines of marriage between one man and one woman.

And even within these parameters, we can’t declare ownership.

Completely understanding the complexity of the human body is still a mystery. There are some things that we still do not know about our bodies.

However, the Owner of us knows all things. It’s called Omniscience or all knowing. He is called God.

The other lie to suppress the charges of murder is “terminate a pregnancy.”

Between these two lies, man has flipped the ownership script. Man has assumed it has the right to do as he or she pleases with impunity. There is no impunity.

Guilty of adultery, fornication, and murder.

If this is your only excuse to insulate you from being charged with sexual immorality and murder, you had better reconsider. God will hold no one guiltless. Many people say that they do not fear death. It’s not death that you should fear. It’s what’s going to happen afterwards that you should fear.

Hebrews 9:27 says “And as it is appointed unto men once to die, after this the judgment.”

Notice that the words underneath this adorable child ring true.

But let’s take this a step further.

Adultery and fornication is a choice made by two persons deliberately intending to sin against God and themselves. Notice what 1 Corinthians 6:18 says. “Flee sexual immorality. Every sin that a man does is outside the body, but he who commits sexual immorality sins against his own body.”

The choice to have sex before marriage is a sin before God. The choice to engage in sex is the one choice that will make or break a person. Many people give in to the saying, “You know that they are going to have sex.”

But you do not have to have sex before you are married or if you are a widow.

Otherwise, do what Paul admonished in 1 Corinthians 7:1-2,9 “Now concerning the things of which you wrote to me: It is good for a man not to touch a woman. Nevertheless, because of sexual immorality, let each man have his own wife, and let each woman have her own husband….but if they (unmarried and widows) cannot exercise self- control, let them marry. For it is better to marry than to burn with passion.”

Hebrews 13:4 says “Marriage is honorable among all and the bed undefiled but adulterers and fornicators God will judge.”

As a side note, there are many single women and widow women that struggle to maintain sexual purity. There is this acronym called HALT. In the word HALT, the definition means STOP!!!!!

In other words, before giving in to the temptations of the flesh, just stop and think about what you want to do.

If any of these things are happening in your life, it is not the reason to engage in sexual immorality.

2 Peter 1:3-9 says “…as His divine power has given to us all things that pertain to life and godliness, through the knowledge of Him who called us by glory and virtue, by which have been given to us exceedingly great and precious promises, that through these you may be partakers of the divine nature, having escaped the corruption that is in the world through lust.

But also for this very reason, giving all diligence, add to your faith virtue, to virtue knowledge, to knowledge self- control, to self- control perseverance, to perseverance godliness, to godliness brotherly kindness, and to brotherly kindness love. For if these things are yours and abound, you will be neither barren nor unfruitful in the knowledge of our Lord Jesus Christ. For he who lacks these things is shortsighted, even to blindness, and has forgotten that he was cleansed from his old sins.”

It’s worth it because 1 Corinthians 6:9 says “Be not deceived….neither fornicators……..nor adulterers…….shall inherit the kingdom of God.”

You do not want to go to hell and burn forever for one moment of sinful pleasure. Remember, death can come at any moment. And the coming of the Lord is imminent. This should be incentive enough to abstain from every form of evil.

As far as those that is in the world, your arguments fail the standard of the Scriptures. To continue in sin is a death trap that the Lord can free you from. You need to be saved from sin, death, and hell. Jesus paid this price for you over 2015 years ago just for you.

IF you repent or reconsider your ways, seek the Lord while He may be found and call upon Him while He is near, forsaking wickedness, and your unrighteous thoughts, the Lord will abundantly pardon your sins when you place your total faith and trust in Jesus.

God will forgive you of adultery, fornication, and murder. All your sins could be washed away by the shed blood of Jesus. Apart from this salvation, there is none else that can save you should you die without having your sins pardoned in full.

Cast aside the lies of “this is MY BODY!!! and “terminating a pregnancy,” it’s not worth it. Receive the truth and come to Christ before it is too late.