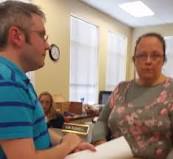 Well, the showdown was with fireworks.

The homosexuals were not happy and put on a childish tirade to force the clerk to submit to their will.

Clerk Davis has a valid point.

For rulers are not a terror to good works, but to evil. Do you want to be unafraid of the authority? Do what is good, and you will have praise from the same. For he is God’s minister to you for good. But if you do evil, be afraid; for he does not bear the sword in vain; for he is God’s minister, an avenger to execute wrath on him who practices evil.

Therefore you must be subject, not only because of wrath but also for conscience’ sake. For because of this you also pay taxes, for they are God’s ministers attending continually to this very thing. Render therefore to all their due:taxes to whom taxes are due, customs to whom customs, fear to whom fear, honor to whom honor.”

Authority comes from God. Authority must be righteous.

Proverbs 14:34 says “Righteousness exalts a nation but sin is a reproach to any people.”

In order for government to be righteous, it must first come from God, and any law that is made must be a righteous law.

Clerk Kim Davis cited her Biblical convictions and she has a very valid point.

Homosexuality is sin, therefore, the Lord God will not advocate sin.

Clerk Kim Davis, in making a bold stand, is simply letting the whole world know that even though she was elected into office by the people of Rowan county, she is an appointed official by God. Therefore, the Word of God takes unequalled precedence over the abominable laws of man to legitimize the sin of homosexuality.

Fear of God takes precedence over fear of man.

Even with the threat of man’s court, their punishment is not comparable to the judgment of Almighty God.

So for all of you that support the homosexuals, you are on the wrong side of the judgment of God.

The story of Clerk Kim Davis’s stand against the homosexuals could be read here.