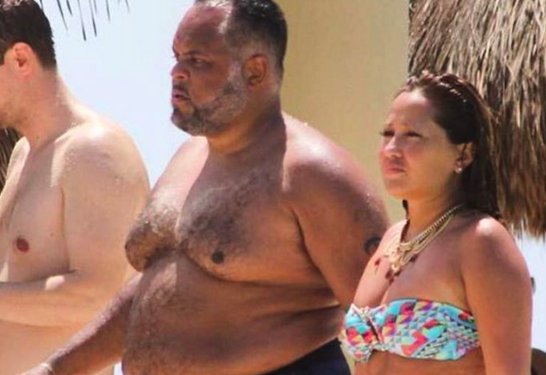 I want to thank my FB friend Daniel for posting what may be clear and conclusive evidence of an ongoing incident with Israel Houghton.

We are all hoping that these pictures of Israel Houghton and his girlfriend are not true.

That there is a mistake or a deliberate act to smear a person’s character.

I know, here I am giving the benefit of the doubt speeches.

Clearly, we want to be truthful and get to the bottom of this because this is out of control.

On the other hand, should this prove to be conclusive, it is God exposing sin for what it is. Sadly, we just do not get it when others are exposed. We tend to look, SMH, and play the hypocrite with our own Secret Sexual Sins.

I have no business even talking to you about this because of the sins I’ve committed.

But I exposed myself. I told the world about what I did while in the pulpit.

It’s in hopes of helping someone caught in the same thing to be free.

I didn’t and can’t deliver myself or others.

God, with the help of many prayers of others and transparent discussions, helped me to see where my life was and where I was going if I didn’t repent (change my mind).

Grace and mercy prevented my departure into outer darkness where there is weeping and gnashing of teeth.

We do not believe that the Lord would expose us.

We are overtaken with faults of our own and we shake our heads at others, including Israel.

It should remind us to check everywhere and be diligent about stopping forever our sins.

It may be obsessive as we pursue this unfortunate situation, but when the United States and the world can no longer look to the church because of what’s in the house of worship, this is not gossip, here say, or trying to destroy a person.

Surely, this vision that happened in less than a flash is taking the entire Body of Christ to low levels of depravity such as never seen or heard of before.

In my previous post, I pretty much gave Israel Houghton the benefit of the doubt.

In light of new developments, it became necessary to share this.

Numbers 32:23 “But if you do not do so, then take note, you have sinned against the Lord; and be sure your sin will find you out.”

John 3:19-21 “And this is the condemnation, that the light has come into the world, and men loved darkness rather than light, because their deeds were evil. For everyone practicing evil hates the light and does not come to the light, lest his deeds should be exposed. But he who does the truth comes to the light, that his deeds may be clearly seen, that they have been done in God.”

1 John 1:5-10 “This is the message which we have heard from Him and declare to you, that God is light and in Him is no darkness at all. If we say that we have fellowship with Him, and walk in darkness, we lie and do not practice the truth.

But if we walk in the light as He is in the light, we have fellowship with one another, and the blood of Jesus Christ His Son cleanses us from all sin.

Ephesians 5:12 “For it is shameful even to speak of those things which are done by them in secret. But all things that are exposed are made manifest by the light, for whatever makes manifest is light.”

Now, the question must be asked.

When were these pictures taken?

If you are still married, why are you with another woman?

IF you are wearing a wedding band during divorce proceedings, it’s not uncommon for a man to have his wedding band on. Or could this be another ring that means something else?

But for whatever reason, Israel decided to keep it on.

Men are different and have wide ranging preferences when it comes to wearing a ring or not. But when a man wears a ring on his left ring finger, there is no doubt that it signifies that you are married.

It is safe to say that most men will announce their availability or the end of a previous marriage by not wearing a ring on the left ring finger.

There’s a lot of men that do not care about whether they wear their wedding ring or not and will commit adultery even with a wedding band on their finger.

If you are the girlfriend, you can wear what you want to wear on your ring finger, but we all know that wearing a ring or two rings (engagement ring, then the wedding band) generally signifies that you are married.

If it is just the diamond ring or small ring, it could mean anything but we all know that it symbolizes that you are engaged, and as one judge puts it, it’s in “contemplation of marriage.”

Now when you see the rest of these photos, again, when were they taken?

And the real question, why, are you together, hugging one another and taking “selfies” like most couples and married couples do?

Now, the link that I’ve provided is from a worldly source. We all know that the world will take every opportunity to discredit the name of Jesus. Should these pictures be conclusive, and it points to concrete evidence, we must take a moment and get back into fearing GOD.

Even if these pictures prove to be false, we cannot be found not returning to the fear of God.

God holds our breath and at any moment, God can snatch that breath and heart beat away from everyone of us and plunge us into eternity.

We do not think that the Lord would do this but ask the person in the parable when his soul was required of him that night? (see Luke 12). At any moment, we could breathe our last and in a split moment, open our eyes in a dark place because of sin.

We have no fear of God before our eyes. We are no longer afraid of God. We treat God like a errand boy. A lackey. We do not understand the power that God has over the souls of men. We treat His Word with contempt and we spit on Him when He doesn’t come through for us. We have pride and arrogance in our hearts and we assume that He is good with our sin.

The death of His Son proved the seriousness of redeeming man from sin.

And we dare Him to take our lives as we openly defy Him in utter contempt.

If we do not return to the fear of the Lord, our iniquities, like the waves, will carry us to the waves of fire, where there will be no rest, no mercy, no grace, and no peace.

The pictures of Israel Houghton and his girlfriend could be seen here.