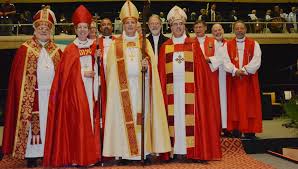 The Anglican Church suspended the U.S. Episcopal church for acceptance of homosexual marriage.

1 Corinthians 5:9-11, Paul says “I wrote to you in my epistle not to keep company with sexually immoral people. Yet I certainly did not mean with the sexually immoral people of this world, or with the covetous, or extortioners, or idolaters, since then you would need to go out of the world. But now I have written to you not to keep company with anyone named a brother, who is sexually immoral, or covetous, or an idolater, or a reviler, or a drunkard, or an extortioner — not even to eat with such a person.”

With such a “suspension,” you are still associated. We all know that it is in hopes of reconciling. However, reconciliation demands separation to underscore the severity of their sin.

Paul said in Ephesians 5:8-14 “For you were once darkness, but now you are light in the Lord. Walk as children of light (for the fruit of the Spirit is in all goodness, righteousness, and truth), finding out what is acceptable to the Lord. And have no fellowship with the unfruitful works of darkness, but rather expose them. For it is shameful even to speak of those things which are done by them in secret. But all things that are exposed are made manifest by the light, for whatever makes manifest is light. Therefore He says:
“Awake, you who sleep,
Arise from the dead,
And Christ will give you light.”

So there must be excommunication until there is a renunciation of the sin of homosexuality.

To undergird renunciation, there must be repentance of sin and a re-establishing of a complete unadulterated love for God and unquestioned obedience to His Word to abstain from sexual immorality.

Hebrews 12:14 says, “Pursue peace with all men, and holiness, without which no man sees the Lord.”

When you deny that the Bible is final authority, man has no authority to authorize any sin that God condemned. To do so would make man higher than God.

Last I’ve checked, we die, not God. The created is never above The Creator.

I defy anyone to throw God off His throne and kill Him.

This is exactly what the devil and the world wants to do but it is 100% IMPOSSIBLE.

The Anglican Church need to establish backbone policy and disassociate themselves according to Scripture. Only then will their actions be deemed valid. To parlay with rebels keeps the wrath of God upon all who defy the Word of God.

Just like there is no tolerance for law breakers (or at least that’s the way it’s supposed to be), there must be zero tolerance for anyone that circumvent God’s Word to facilitate and foster sin.

The article on the Anglican church could be read here.